Becoming a Census Worker – What to Expect?

Every decade the U.S. Census counts everyone who lives in the United States and the five U.S. territories. An accurate count ensures federal funds, grants, and support is distributed based on population totals and other factors. As part of the effort to have an accurate count, the U.S. Census enlists census takers to interview household residents that have not previously responded to the census. To better understand the role and experience of a census taker, we’ve gathered feedback from a current worker who has shared their experience leading up to the field work and what they’ve learned along the way.

Interview edited for brevity and clarity.

How did you hear about becoming a Census worker?

I was standing in line outside of the DMV early in the year (pre-shutdown) and someone was handing out flyers. My mom also worked as a census worker in the 90’s so I was aware of what the census was and that there were people that helped obtain answers by working in the field. The flyer showed the website and the different positions you could apply for.

Has the pandemic impacted your schedule and start date?

Yes, I was supposed to start towards the end of March, after my background check had cleared. March would include training and we would start in the field in April. We were supposed to start enumerating on April 1st according to the initial Census schedule, but everything was paused once the state released social distancing orders.

When were you advised that you were cleared to start in the field?

We weren’t given an update until July, once things started reopening in the state. It went hand-in-hand with the state guidelines on reopening.

How was the training process?

I think it’s usually in person, but due to the pandemic, everything has been done online. It included videos, quizzes, practice using the apps and game simulations on the phone. Different modules are supposed to help you practice different situations you would encounter in the field and you complete a quiz after every module. You must also complete a group conference call with someone that goes over all the materials again and allows you to ask any additional questions and then you must complete a quick test.

Once the state reopened, how did you feel about going out into the field during a pandemic?

Honestly, I didn’t know what to expect. I thought people wouldn’t open their door or it wouldn’t go smoothly. The first day brings the most stress and anxiety because yes – you’ve received the training, but you haven’t had a live interaction with someone to complete the census. After the first day, it’s not bad. By this point, you’re also used to maintaining the required distance mandated by safety regulations, wearing a face mask when outside and around people, and using the hand sanitizer provided.

What options are there to complete the census?

People can complete the census online, by mail or by phone. Honestly, I noticed that a couple of people that completed the census with me said that they did not receive the form or that it was greatly delayed. I even had someone that received it the day I went to their house. It seems that the mail may have been delayed for a lot of people, which impacted the options some had to fill out the census.

Would people respond to the door knocking and cooperate on completing their form?

People would open the door and for the most part, they would come out wearing a mask and keeping the required distance or would speak through the screen door. Most people were nice and easy to work with.

How do you identify a census worker?

They must have a mask on because of COVID, have a lanyard that says Census 2020 along with our ID. We must present it to anyone that would like to verify. We’re also equipped with a bag that says U.S. Census worker that holds our materials. Having the census gear makes it easier to identify one as they are walking in the neighborhood. 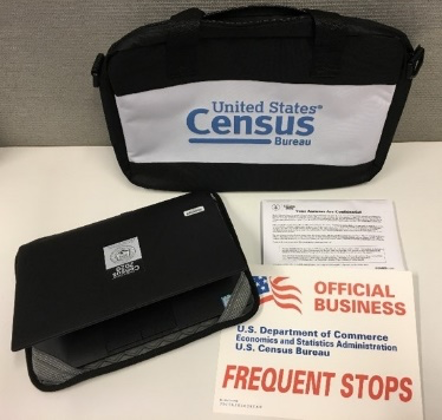 Did people know what the census was?

I didn’t really ask people why they haven’t done it. I just introduced myself and let them know that I was there to collect data. Some would ask what the census was and once I informed them, they would work with me to complete it. Some said they were aware of it, but just didn’t get to it. Others would ask if they could just do it online since they didn’t want to provide personal information to someone else. Others also said they didn’t receive the specific code in the mail to complete the census for their address.

How long does it take to complete the form?

Honestly, it depends. If it’s one person, like two minutes. If there’s 10-15 people living there, it could be 10-15 minutes. It’s fairly easy and information most people know off the top of their head, but sometimes people would have difficulty recalling someone’s age or birthday.

Were there certain questions that people struggled with?

In the Latino community, I noticed that most people didn’t know what to list as race. As an enumerator, I can’t advise them on what to respond as it has to be their choice. It comes down to how they identify. A lot of people had difficulty if parents came from different countries and the children were born in the United States. They weren’t sure what to put.

What misconceptions have you seen?

Honestly, I would label it more as misinformation. I had a person ask about whether citizenship status was a question or if I would ask about their social security number. They were getting a lot of scam calls saying they were with the census and they were collecting their social as part of the questionnaire. I assured them that it’s not part of the questionnaire and I left them with a document that provided more information detailing the information asked. I also think that the people that may have misconceptions are the ones that are not answering the door when we knock. We leave a document indicating the reason why we were knocking. For these cases, neighbors are very helpful because they can tell us when someone tends to be home and may know information on how many people live there and when would be a better time to go back.

What does the handout include?

It affirms that the information they share with us is completely confidential. It shares additional details on who should be counted as part of their household and clarifies that it should be who lived there on April 1st. Some people didn’t want to receive the handout because of the pandemic; they didn’t want to receive papers from someone outside their household. I explained what the paper indicates for additional clarity.

What challenges did you encounter?

Some addresses pertained to homes that were part of a business or behind a locked gate and some had entries from an alley. There isn’t a clear way to find out whether anyone is residing there or if they are home. Some people’s addresses were not matching what is in the system because they may have built it or added it in the last ten years.

Every census worker’s experience will be different because they tend to assign workers in their local neighborhood so you’re familiar with the area and the demographics. The exception would happen towards the end of the field work because they’re making the last push to collect data from all the households that haven’t responded. Also, I believe the size of the community and the culture impacts the dynamics of the neighborhood. I noticed that in larger cities they may not be aware of who their neighbor is and may not be as community oriented.

Based off your experience, would you sign up to be a census taker again?

Sure, why not. A big perk – it’s a job. I wouldn’t want to do it during the summer because of the heat. Also, being a census taker during a pandemic makes it very difficult, but I think that in normal times – people often use it as supplemental income since the schedule is flexible. It’s a great way to make extra income and work outside your standard job. What’s nice is that you’re not obligated to work full-time. You list your availability and they work with your schedule. It’s only during the final leg of the field work that they are being a little more specific with the hours people need to work as they are targeting hours that people are most likely to be home. Overall, I had a good experience; it gets you walking and active, it’s an important task, it gets you out of the house, and you make extra income.

We wanted to share our thanks to all the census personnel helping every household understand and complete the U.S. Census and helping ensure everyone is counted.

Encourage family and friends to fill out the census questionnaire to ensure fairness and opportunity for their community’s future.